How to Enable Night Light in Windows 10

The World’s popular messaging service Whatsapp finally gets WhatsApp Call Waiting support for Android devices. With an update 2.19.357 that brings call-waiting support and new privacy settings. This feature will eventually allow users to accept incoming WhatsApp voice calls while they are already on another request. Earlier, this call-waiting feature was only available for iOS users but now has been rolled out for Android too. The functionality works the same as the call-waiting features works on the phone works.

But here’s a catch, if you receive a call during another WhatsApp voice call, the other call will automatically get disconnected. Although, it seems quite evident on Whatsapp’s part, at least now you’ll get to know if someone called you. Before this feature had rolled out, if someone called you while you were on another call, you would not be notified of it. The callers hear the phone ring and then get disconnected after a while. It can look rude to someone important to you.

But, with this all-new update, WhatsApp is hoping to solve these issues at least a part of that problem, although putting calls on hold should have been included as well.

Besides, WhatsApp call waiting support feature, the Facebook-owned app has also released new privacy settings that will enable users to have control who can add them to groups. This is, however, not a new update, it seems to be rolling out for a wider audience. In addition to this, WhatsApp has also fixed an issue that caused a fast battery drain on a few devices. Here’s the full changelog screenshot, you can read it here. 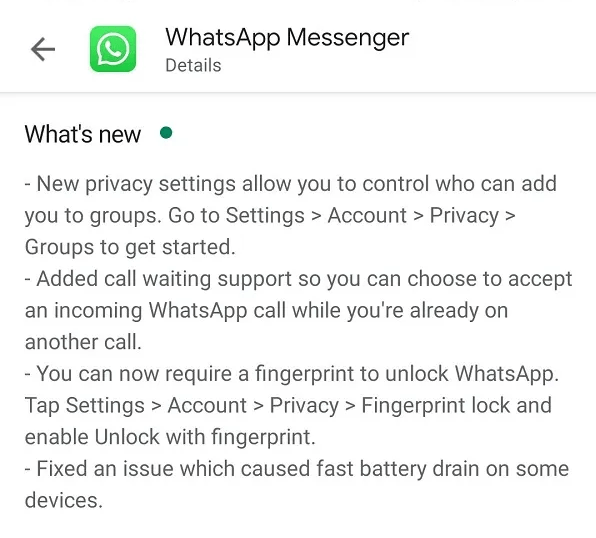 The company had recently released the fingerprint lock function that allows users to protect their chats from prying eyes of strangers while in the future updates. The company is expected to release self-destructing messages, dark mode, multiple devices support, and the ability to hide muted status. These features are currently under development and might see the day of light in the coming months.

This new WhatsApp call waiting support android feature is also available on the latest beta version for the chat application.

How to Uninstall Microsoft Edge in Windows 10?

How to Bold in Discord: Check Complete Steps!

How to Watch Netflix Together With Your Friends Online

We @Techycoder your number one source for all things. We’re dedicated to giving you the very best of knowledge.