The Online streaming service wars started, Disney+ has finally arrived with a boatload of nostalgia. It has currently been made available in just three countries, but we have found a nifty trick to make Disney+ work in India as well.

Yeah, we’ve already penned down an in-depth guide on how to access Disney+ in India. You can check out the platform for yourself (with a 7-day free trial period), but while we were attempting to Disney India Subscription – Disney plus in India, we came across what appears to be Indian subscription plans. Completely Shocked?

We, too, were shocked when we first saw that Disney+ is showing subscription prices in Indian rupees. The screenshot below shows the “Start Free Trial” button, with the first appearance of the Indian subscription. We were surprised by seeing the price and thought it must be an error or server-side mistake. But we were wrong. 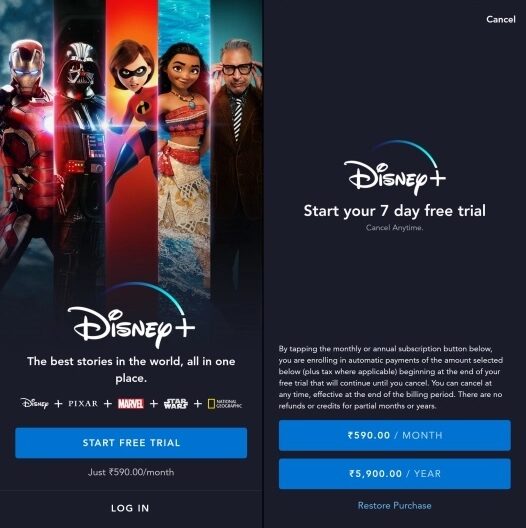 On tapping the Start Free Trial button, the next screen shows not just the monthly subscription of Rs. 590 but also the annual subscription price of Rs. 5900, but it was again in Indian rupees. We all were quite sceptical of the subscription is activated, but it went through without issues. This could mean that Disney+ could officially be coming to India, but what about their Hotstar partnership?

Hotstar Partnership or A Standalone Attempt?

The chatter, as mentioned above, is in stark contrast to the fact that Hostar will be hosting all the Disney+ content in India. Owned by Star India, Hotstar is essentially a part of Walt Disney Group, and it is said to be localizing Disney+ content by dubbing movies and TV shows or adding subtitles in regional languages such as Hindi, Bengali, Tamil or Telegu.

Disney revealed this partnership when it was first announced back in April 2019, but the only piece of content we’ve received on Hotstar at launch is Avengers: Endgame. And if you visited Twitter yesterday, you would see Hotstar replying to every enquiry about the India availability of Disney+. And the company says it’s working on bringing Disney+ to India.

If the rumored free Disney plus Hotstar premium account monthly subscription price of Disney+ turns out to be accurate, then it would face fierce competition against some of the most popular streaming platforms in India. We’ve decided to compare Disney+ subscription plans against the newly launched Apple TV+, Netflix, Hotstar, and Amazon Prime Video in India.

Disney+ has also debuted several original shows, but the higher asking price could undoubtedly be a deal-breaker for a multitude of users. Also, the massive content library on Netflix (including favorites like Stranger Things and House of Cards) could draw in users more quickly. Some, on the other hand, will prefer Amazon Prime Video and Hotstar over this to get access to more services or watch cricket matches, respectively.

Disney+ Be Launching in India?

We have been using Disney+ for the past 12-odd hours and are liking the whole experience. But, we are unsure whether Disney plans to officially launch the streaming service in India or stick to the original plan — porting the content to Hotstar with some much-required localization in tow. What are your thoughts on this? Have you tried out Disney+ yet? Speak your thoughts with us in the comments below.