How to Send Animated Stickers on WhatsApp

The latest hints from WhatsApp beta evident that the chat application might soon add support to send animated stickers packs. Although, there is still no hint of WhatsApp dark mode.

WhatsApp is one of the most popular messaging apps worldwide and is owned by Facebook — the company everyone loves to hate. Although, users keep saying that it’s not as secure as it would have. In spite of people hating the company, their user base isn’t dwindling. The reason behind it is that the company keeps adding new features now and then.

Now, WhatsApp’s latest beta update for its Android platform has claimed that the company might be bringing support for animated stickers for WhatsApp, similar to Telegram. WABetaInfo uncovered this leak on its official Twitter handle. Moreover, it has a long track of digging deep into WhatsApp beta updates to find what the Facebook-owned company is working on allowing users to send animated stickers on WhatsApp.

All Stickers Packs received a server side update from WhatsApp!
Open WhatsApp > Chat > Stickers button > Plus icon and you see “UPDATE” for all packs you have previously downloaded.

Reasons of the update are actually unknown. Maybe some improvements. pic.twitter.com/h2k1oPsyOP 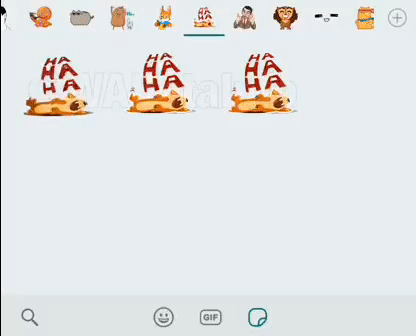 Recently, WhatsApp’s new ‘Disappearing Messages’ feature was also spotted in the latest beta version 2.19.275 for its android platform. After the final update, the users will be able to send animated stickers on WhatsApp to their contacts.

With the ‘Delete Messages’ feature, WhatsApp group admins will be able to select the duration for messages to disappear on the group. It will be automatically deleted once the time frame crosses for the messages.

Initially, this new feature was expected to be available for both individual and group chats. And reports now claim that the feature will be limited to the group only.

Moreover, the ‘Delete Messages’ feature for groups will make it easy for the admins to manage old messages and chats records.